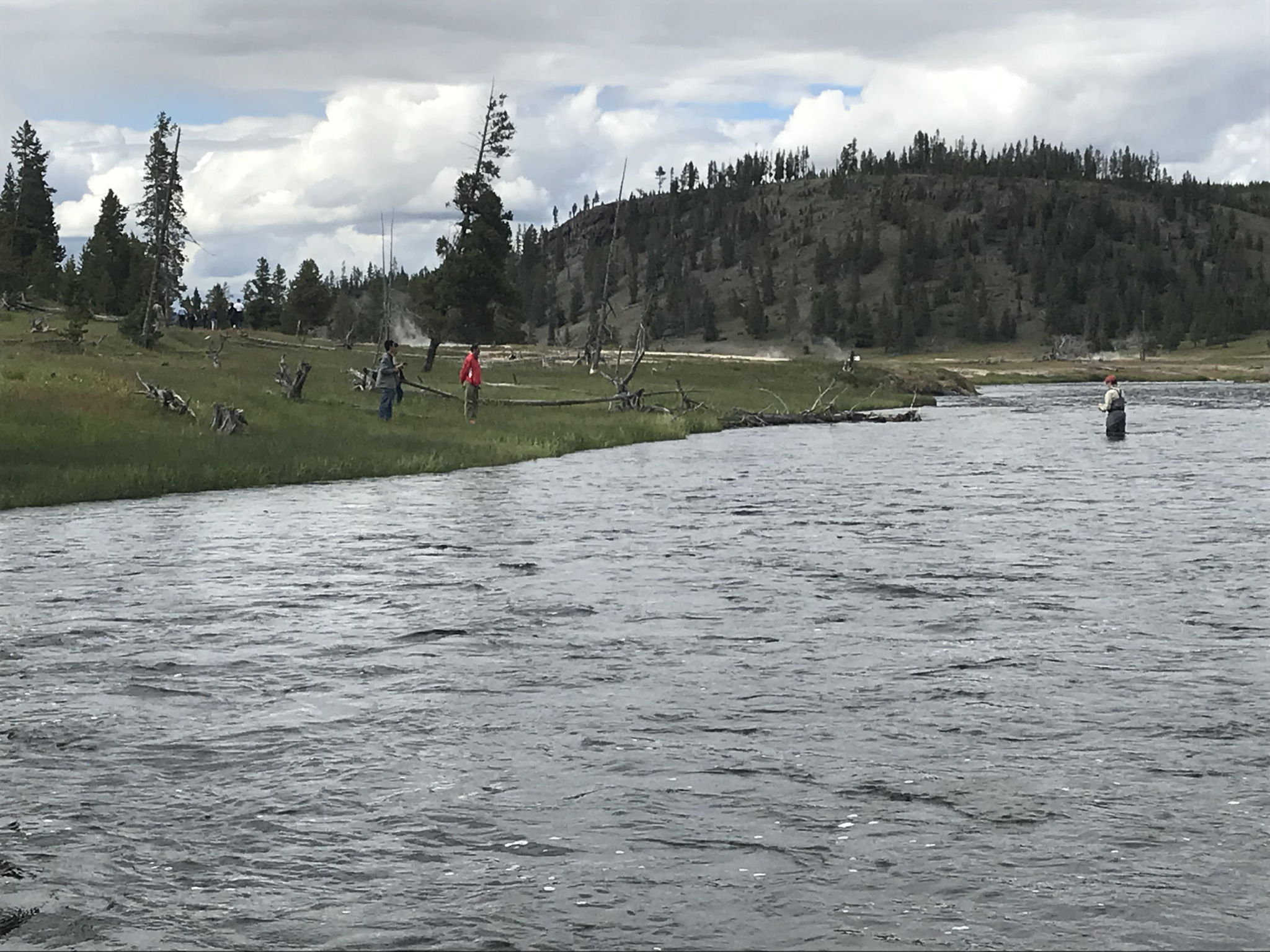 When fishing in heavily traficked areas in Yellowstone National Park, be prepared to fish for an audience! Here Doyt Con Jr. is seen fishing with a few park tourists in tow.

Yellowstone River: The Yellowstone River has seen a significant drop since we last posted a fishing report. The river is down to 14,800 cfs in Livingston and 15,000 cfs up stream at Corwin Springs. We are confident that the river has peaked and that she will continue to drop as we get closer to being able to put boats on the water. There is still a lot of mud coming out of the park so we suspect it will not be clean for a little bit, Rick's guess is July 15th. Continue to check in as we get closer to a clean river!

Yellowstone National Park: The park has been fishing well for the last few weeks since it opened. Recent rains have caused slight spikes and dips in many of the streams and rivers in the park. As certain streams drop into shape it is time to take advantage of smaller rivers before they warm up!

Firehole River: The weather we've been having the last few days has spiked and dropped the flows of the Firehole. Dry fly fishing has been a bit spotty, but fish are certainly rising to bugs. There have been a good number of PMDs, caddis, and some yellow sallys in the air. Swinging soft hackles has been the ticket, and even when fish are rising a swung soft hackle has been enough to influence a take. Variations of caddis dries, caddis pupa, PMDs duns, PMD nymphs and soft hackle variations have been working. Don't be afraid to try your more generic patterns like prince nymphs, hares ears, and rubber legs. Get out and fish the Firehole while the fish are still in it!

Gibbon River: Similar conditions as the Firehole River. Look for Caddis and PMD hatches throughout the days. Lookout for thunderstorms and cloud cover in the late afternoon and evening to influence a brown drake hatch in the meadows. Fish have been caught on dry flies, nymphs, as well as some smaller streamer patterns. You wont go wrong if you fish it like the Firehole or Madison Rivers.

Madison River: The Madison River in the park has been fishing well. Similar bugs as the other rivers. Some anglers have gotten trout to rise to larger dry flies, as well as traditional nymph patterns(prince nymph, copper john, pat's rubber leg, etc). Streamer fishing has been producing fish as well. There are still some runup fish from Hebgen Lake, but good stream temperature and food source will keep them in the river until they are forced to retreat back to the lake. Like the Firehole River, NOW is the time to fish the Madison before it heats up!

Lamar River: The Lamar River is still running muddy. It is currently running at 4,440 cfs at the Tower Ranger Station. Still need a little while before that section of the park is fishable. Looking to be really great fishing in August!

Soda Butte: Current flows read 426 cfs, so the river is still high, like the Lamar, this river still needs some time before it will be back in shape. Like the Lamar, check back in August!

Gardner River: The Gardner is getting close! Although flows are still high, the water clarity isn't too bad and anglers are beginning to have some success. We have also gotten word that there are some salmon flies starting to emerge near the North Entrance of YNP. Watch the river as we continue to get hit with rain as it may rise again and get dirty. The Gardner still needs a little time before it is really fishing well.

Paradise Valley Spring Creeks: The spring creeks are fishing well. Nymphing midges has been the ticket for most of the spring season. Size 20-22 Zebra Midges, Copper Sawyers, and Wollum's Spring Creek Baetis have been fishing well under a foam indicator on 6-7x tippet. As the days go by, look for PMD hatches, as their numbers are currently on the rise. If you haven't already, make sure that you call in advance as most days on the creeks have been booked up for quite some time. Don't be afraid to call in the mornings to check for last minute cancellations!

All in all, now is a great time to get over to the western section of Yellowstone National Park. The Firehole and Madison Rivers only have so much time before temperatures rise and fish begin to move into cooler systems. Alternatively, the spring creeks, when available are a great option as well as any of the local private ranches in the area. Feel free to call or swing on by the shop for more information regarding local rivers and streams.